If you walk on any excavation you will often see when describing the remains of a building what period it dates from. An average visitor might wonder how you determine that date. For modern history, there are usually written sources that tell when something was built, by whom and when alterations or extensions took place. Even for classical Roman buildings, especially official government buildings such as temples, theatres, curia etc, we often have written sources, not to mention memorial stones and inscriptions. How different it is for ordinary houses, shops and catering establishments. Here, we usually rely on architectural styles and the building materials used.

The same goes for changes to a building, a bricked-up entrance as we see in Ostia in the Casa di Diana, where at a later stage on the ground floor, entrances were bricked up and new doorways appeared to create external retail spaces. Or at the Termes of Mithras where, underneath the building, one of the service rooms was converted into a meeting place for the followers of the god Mithras. No memorial stones were erected or inscriptions placed for this purpose.
In the absence of surviving records, we can only look at the style, materials used, techniques applied, quality and possible context of the site.

Originally, local building materials were used. Common was the use of tuff. First in large rectangular blocks of the same height, without cement, stacked together. This system, called opus quadratum, was used by the Romans from the 6th century BC. Over the centuries, the form became increasingly sophisticated.
From the second century BC, they started using a system called opus incertum, irregular stones in a bed of cement. Again, over time the stones were cut more squarely so less cement had to be added. With these two systems, people built walls of just stone. The next phase was a wall poured of cement topped with a covering of small, diamond-shaped tuff stones, opus reticulatum. The tuff stones were also sometimes alternated with diamond-shaped stones of a different material, creating a polychrome plaster covering. In a later period, opus reticulatum was often interspersed with bands of brick, called opus mixtum. We are now in the early imperial period. Brick, opus latericium, was then still relatively expensive. Only when the population, initially in Rome, expands explosively and the first insulae (apartment buildings) have to be build, it does become worthwhile to start producing bricks in an industrial way. Brick becomes cheaper and more frequent. Soon, other cities should follow. Large and tall buildings appear everywhere clad with, depending on the period, a range of different colours of brick. On this video Dr. Jan Theo Bakker talks about the dating of these brick walls with a specialist in this field, the Dutch archaeologist Dr. Thea Heres. She explains how to look at these walls and what to look out for in order to figure out the apropriate dating: 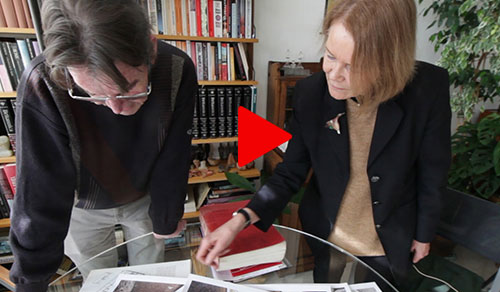