Recently one of our members posted a message on the Facebook page of Roman Ports about the many people who had fled Pompeii in time and thereby survived the eruption of Vesuvius. I read the piece and saw that several survivors eventually settled in Puteoli, a Roman port city on the Gulf of Napoli (read "The Ports of Campi Flegrei"). Because of the latter fact, I announced that the post had been approved. The post had something to do with Roman ports, albeit via a detour. I got immediately the following response: Pompeii itself was a Roman port city too.
I used to read many stories about Pompeii and devour movies. And indeed there was often talk about the inhabitants who fled to the harbour to escape the rain of fire, stones and ash from the eruption. I did not pay much attention to that harbour at the time, Romanports.org did not yet exist.
After the aforementioned discussion, I decided to go deeper into the matter and to look at what kind of port it is when we talk about Pompeii. Without a doubt we would deal here with a river port and not a sea port, but since we recently decided to include the Roman river ports, relevant to trade, here is the report of my research:

Harbour, Oh harbour, where are thou?

Before considering the location of the port, it is useful to find out first something about the city itself.

Pompeii
The name Pompeii would have come from the Oscan3 word for five, pompe, which suggests that the city contained either five hamlets or was founded by five family tribes (gens Pompeia).
Pompeii was built about 40 meters above the sea on a lava plateau along the coast that was created by earlier eruptions of the volcano Mount Vesuvius, 8 km away. The city bordered the Sarno River, the mouth of which was navigable in ancient times and provided with lagoons that served as a safe shelter for the Etruscan and Phoenician sailors from that time.
Soil research below the Samnite and Roman buildings has shown that the southwestern part of the city, between the so-called Foro Triangolare and the Porta Marina, was the oldest part of the city.

According to Strabo4, around the 5th century BC, the city was taken captured by the Samnites from south-central Italy who settled there. At that time Pompeii was already flourishing, as evidenced by the construction of a small harbour near the mouth of the river. Around 524 BC. the Etruscans settled in the city and they also saw the river Sarno as a great communication channel between the sea and the hinterland.

Officially Pompeii was mentioned for the first time in 310 BC., during the second Samnite war when a Roman fleet moored in the Sarno port of Pompei to attack the city of Nocera from there.
At the beginning of the first century BC. several southern Italian tribes revolted against Rome in the so-called Social War. Also Pompeii fought against Rome. The war was won in 89 BC. by the Roman general Lucius Cornelius Sulla. Pompeii became a Roman colony named Colonia Cornelia Veneria Pompeianorum6.  As a punishment, a colony of Roman veterans was established in the city under the command of a nephew of the general, Publius Sulla. The Oscan, still the official language in Pompeii, was then replaced by Latin and the city became soon Romanized in institutions, architecture and culture.
As already mentioned, Pompeii was now an important trading place for goods that were brought in and distributed by sea to Rome or via the nearby Via Appia to southern Italy7. Legends tell that Pompeii was one of the more important ports in the Gulf of Naples where neighbouring cities such as Nola, Nuceria and Aceria would have sent their products to Pompeii for transportation across the entire empire. Products such as olives, olive oil, wine, wool, fish sauce (garum), salt, walnuts, figs, spices, shrimps, silk, wild animals for the arena and slaves to man the thriving agricultural industry8.

All of this came to a sudden end with the eruption of Mount Vesuvius in 79 AD. The last thing we hear about the port of Pompeii is the report Pliny the Younger sends to the Roman historian Tacitus about the death of his uncle Pliny the Elder during the eruption of the volcano10:
Pliny the Elder had meanwhile been appointed as commander of the Roman fleet in Misenum, a seaport in the Gulf of Naples. When the eruption of Vesuvius begins, Pliny decides to save as many people as possible with his ships. However, he cannot reach the harbour of Pompeii because ash and lava have made the Sarno shallow and the boats can no longer move forward or backward. Pliny then leaves his ship and manages to reach Stabia, where he dies as a result of suffocation from the hot ejected material in combination with his age and bad health.

The harbour
Although various old sources, as we saw above, tell us that the port of Pompeii played an important commercial role within the system of antique ports around the Mediterranean Sea, up to this day it cannot be said with certainty where this port was exactly located.
Today, the excavated city lies much farther from the sea than in ancient times, but even in Roman times, Pompeii was not really laying on the sea. The port must therefore have been located in one of the lagoons of the Sarno.

Until recently, researchers thought that the port was outside the Porta Marina, as the name suggests. The only tangible evidence for a port, however, would consist of a wall (quay?) northwest of the Porta Marina with stone rings for mooring ships (see figure 5).
In the last 40 to 50 years, much research has been done on the Sarno basin, which has undergone many changes over the centuries due to earthquakes and volcanic activities. This has never resulted in concrete proven evidence, only in several hypotheses for the location of a harbour:
Stefani & Di Maio12 position the harbour in the mouth of the Sarno, which, incidentally, was located to the north in Roman times.
Cinque & Russo13 on the other hand, still talked in 1986 about the existence of a bay in which the harbour should have been located at the current mouth of the river.

In 2004, Curti14 suggested the possibility of a river port in a lagoon in a bend of the Sarno, southwest of the city (see Figure 6). This assumption is based on 3 points:
1. the nearby Temple of Venus, a goddess originally associated with the protection of seaports
2. an area with horrea (warehouses) near the temple
3. the absence of archaeological finds in this area

According to researchers16, geophysical research at the temple of Venus at a depth of 16-25 meters has shown that under the lava of 79 AD. traces of the river have been found. They thereby defended the existence of a port area along the Sarno near the Temple of Venus and suggested the existence of "a second branch of the river" on the south wall of the city17.
Despite these arguments, many scientists believe till today that there has been no active branch of the Arno close to the city ever.
I recently found a hypothesis from the French research agency Arkadias by Patrizio P. about the alleged second port of Pompei at the Porta Stabia near Moregine (see Figure 6)18. The arguments for this hypothesis are the various literary sources that speak of the existence of a harbour basin in a lagoon south of the city gates. The main axis of Pompeii, which ran from Porta Ercolanum to Porta Stabiae, ran to the area called "Moregine". Just north of Moregine, evidence has been found of a sanctuary of Neptune, a deity related to marine activities.
According to Arkadias' hypothesis, the port at the Porta Marina should have had a military character and that at the Moregine lagoon a commercial one. You might wonder why Pliny had to come from Misenum with ships to relieve people if part of the fleet was in the alleged military port near the Porta Marina already and what could have been the use of a second military port so close to that big one in Misenum?
Over the years, researchers have assumed that a natural or artificial branch of the river would have run close to the city. The same applied to the presence of any lagoons.
Between 2015 and 2017, the University of Padua conducted research into the area outside the walls of Pompeii with the focus on the so-called Sarno or Suburban Bathhouse19. The bathhouse is located between the Temple of Venus and the Foro Triangulare. 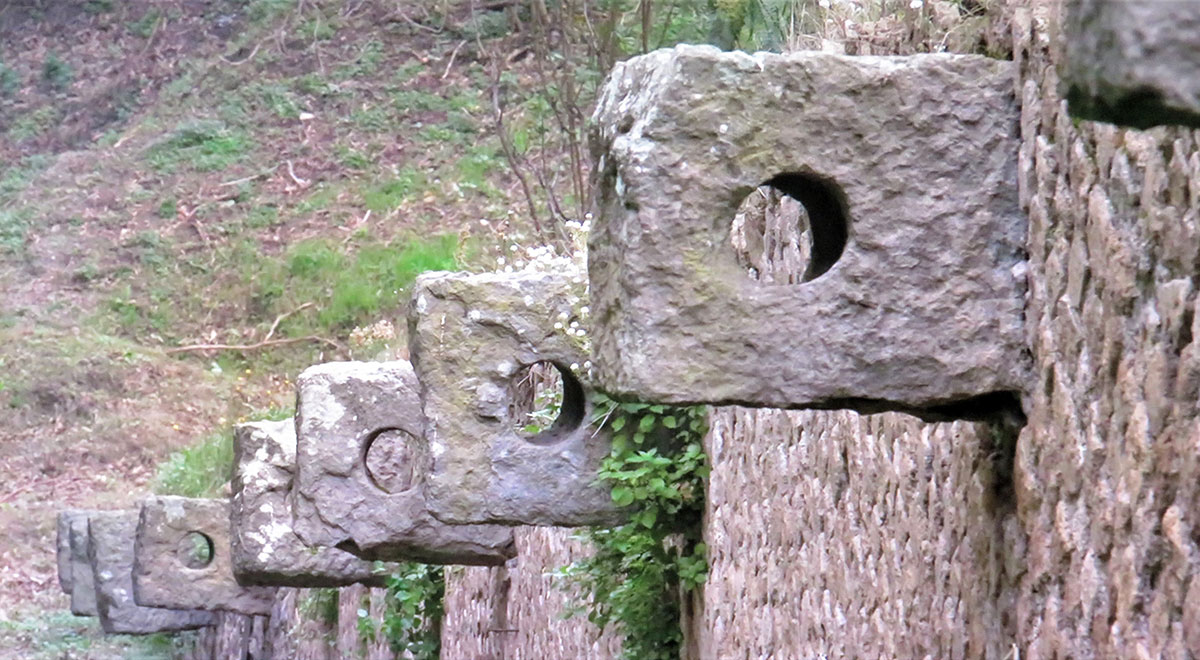 The wall with mooring rings that we discussed earlier is located next to this bathhouse and was already examined in July 199820. A trench was dug here that eventually proved that the wall could never have been a quay. The wall was 10 meters above sea level. Besides that, drilling from the 2015-17 survey has shown that there has never been a branch or lagoon of the Sarno at that location. The soil up to 40 to 50 meters from the city wall was used by the population in Roman times as a dump site for waste. People are still in the dark about the real function of this wall.
In 1959, in a deep bend of the Sarno, the Moregine district was uncovered. This area was connected to docks along the river and there was probably, at the place where the road between Pompei and Stabia crossed the river, a bridge that was mentioned in a Pompeian inscription21. This place would have played a dual role, one of passage and one of seaport22, as would correspond to the description of Pompeii by Strabo in which he links the development of the city to the routes from the mainland to the coast23.

Despite the literary traditions and the many soil investigations, no conclusive evidence of a harbour has yet been found along the southern wall of Pompeii. But .... what is not yet can still come. We are looking forward to new research results.