On the hill of Ficoncella, about 4 kms from the centre of Civitavecchia, you can still admire the remains of the ancient Roman town called Aquae Tauri. The city was built on an older Etruscan town long before the famous Roman baths Terme Taurine had been built. The first evidence for this antique Roman city was the discovery of a large bathing tub with steps, probably the caldarium (hot water bath) of a large bathing complex built in the neighbourhood of the spring of Ficoncella from which water bubbled up. From the summer of 2017 on new excavations of the old Roman city of Aquae Tauri will be executed. We will describe the results of these investigations that go under the name The Achelous Project after a river divinity from Greek mythology and hinting at a legend about the origin of the baths. This is the first report by Professor Massimiliano David from the University of Bologna and Professor Francesca Romana Stasolla from the University of Rome "La Sapienza".

Towards the discovery of Aquae Tauri: the Achelous Project

It is a huge building (almost 160 x 100 meters), the one located around the large pool of the ancient Roman town of Aquae Tauri on the hill of Ficoncella (Civitavecchia), recently cleaned up by the volunteers of the Civitavecchiese Historical Society. Its discovery represents the most important result of the new archaeological research started last summer and carried out jointly by the University of Bologna and the Sapienza of Rome in the territory of Civitavecchia. This impressive structure, revealed by the prospections of Archeores and the first excavation campaign of the last summer, has been presented on December 18th 2017 in the conference room of the Civitavecchia Municipal Library.

The project, called Achelous Project after the river divinity of Greek mythology, was born in 2016, with the support of the Municipality of Civitavecchia, the Superintendency, the University and the citizens. Thanks to new technologies such as geomagnetic prospecting applied to the archaeological survey, we have had the opportunity to identify around the pool this large building, whose existence was until now unknown.

We are talking about an area of considerable dimensions, an entire city now brought to light thanks to new technologies. In this case we can certainly speak of a perfect example of public archaeology, that has greatly involved all the institutions and that bases its strength on the participation of several actors. This will allow, if there are adequate economic funds, to dig and study for many years. 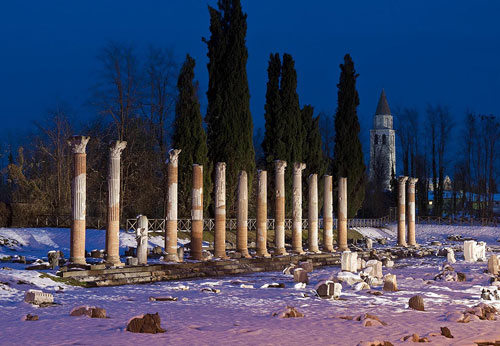