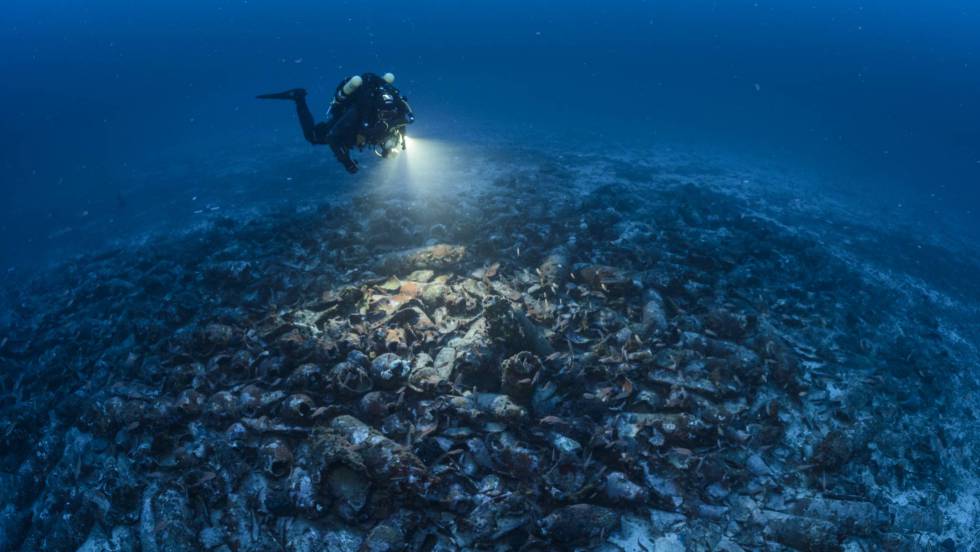 Off the coast of the island Cabrera in the Balearic islands a team of archaeologists has discovered a Roman ship that was shipwrecked about 1800 years ago. The wreck lies at a depth of 70 meters and was examined and photographed by two professional divers in October 2016. The ship is buried beneath thousands of amphora’s which, according to the researchers, still lay on their original place.

According to the discoverers, this ship is the best preserved wreck of the Balearic islands and one of the few remaining wrecks in the Western Mediterranean: "As far as we know, this is the first wreck in Spanish waters that, after the sinking, still is in original condition", stresses Javier Rodríguez, one of the underwater archaeologists who was part of the exploration and documentation team. The waters in which the wreck has been found are part of a National Park.

Fishermen, looking for new fishing grounds, were the first to discover the existence of the ancient shipwreck by the fragments of amphorae found in their nets near Cabrera, South of the island of Mallorca. In response to this, a scientific expedition, equipped with an underwater robot, was sent to explore the ship in april last year. The first thing the robot saw was a huge stack of pottery of different sizes on more than 15 meters sand.

In October, on behalf of the Department of archaeology of the Consell de Mallorca, two professional divers led by three archaeologists of the Balearic Institute in marine archaeology (IBEAM), carried out three dives to the wreck. The expedition was a physical and technical challenge because of the depth at which the remains were located. Some of the 2,000 pictures they made were meant for drawing up a map of the wreck in full size, making it possible to study the wreck in detail. The findings will be published in a scientific journal within a few months, according to Rodriguez.

Fish sauce
The archaeologists are dating the ship back to the third or fourth century AD. It contained between the 1,000 and 2.000 pieces of pottery that will clarify the origin of the ship. Most are large amphora’s, one meter high and manufactured in North Africa. The ship is about 20 meters long and carried ' garum ', a sauce made from salted and sun-dried small fishes and fishwaste. "In ancient times it was considered a delicacy and there was a lot of demand for this product within Roman society." tells Sebastiá Munar, Director of the Scientific Institute IBEAM, which calls the discovery an "archaeological treasure.

The researchers assume that the boat sailed on the route between North Africa and Hispania, the South of France or even up to Rome. "The Balearic Islands were only half way and offered a good place for ships looking for shelter, for example, a storm," said Rodriguez. "But sometimes they did not reach the port and sank," he added.

The analysis of the wood can reveal exactly where the ship came from, although, during this first phase of the study, one will be primarily busy to ensure that the ship not will be plundered.
According to the discoverers, already 12 shipwrecks from the classical period have been found in the waters of the National Park of Cabrera. This gives an idea of the importance of this archaeological enclave. Munar stresses the need to explore the waters of the Balearic Islands. Looking for more wrecks before they can be damaged or stolen.

The find was presented by their discoverers along with Minister of culture and heritage of the Consell de Mallorca, Francesc Miralles on 27 January 2017